By Paul Menser for INL Public Affairs and Strategic Initiatives

Thirty-nine students from Idaho Falls area schools converged on the Center for Advanced Energy Studies (CAES) on Feb. 22 to discover what the “E” in STEM represents.

STEM, of course, is Science, Technology, Engineering and Math, a critical focus as the United States contemplates its competitive standing in the 21st Century. According to the National Science Foundation, “(Scientific) and technological innovations have become increasingly important as we face the benefits and challenges of both globalization and a knowledge-based economy. To succeed in this new information-based and highly technological society, students need to develop their capabilities in STEM to levels much beyond what was considered acceptable in the past.”

Without engineering, science and technology would stay in the lab and never enter the world. With National Engineering Week occurring in mid-February, the leadership at Idaho National Laboratory decided it was an ideal time to premier “Engineering Your Future,” an event featuring workshops on mechanical engineering basics, wind energy, data visualization, drone flight simulation, and the GridGame, a computer program devised by INL engineer Tim McJunkin to simulate electrical power grid management. 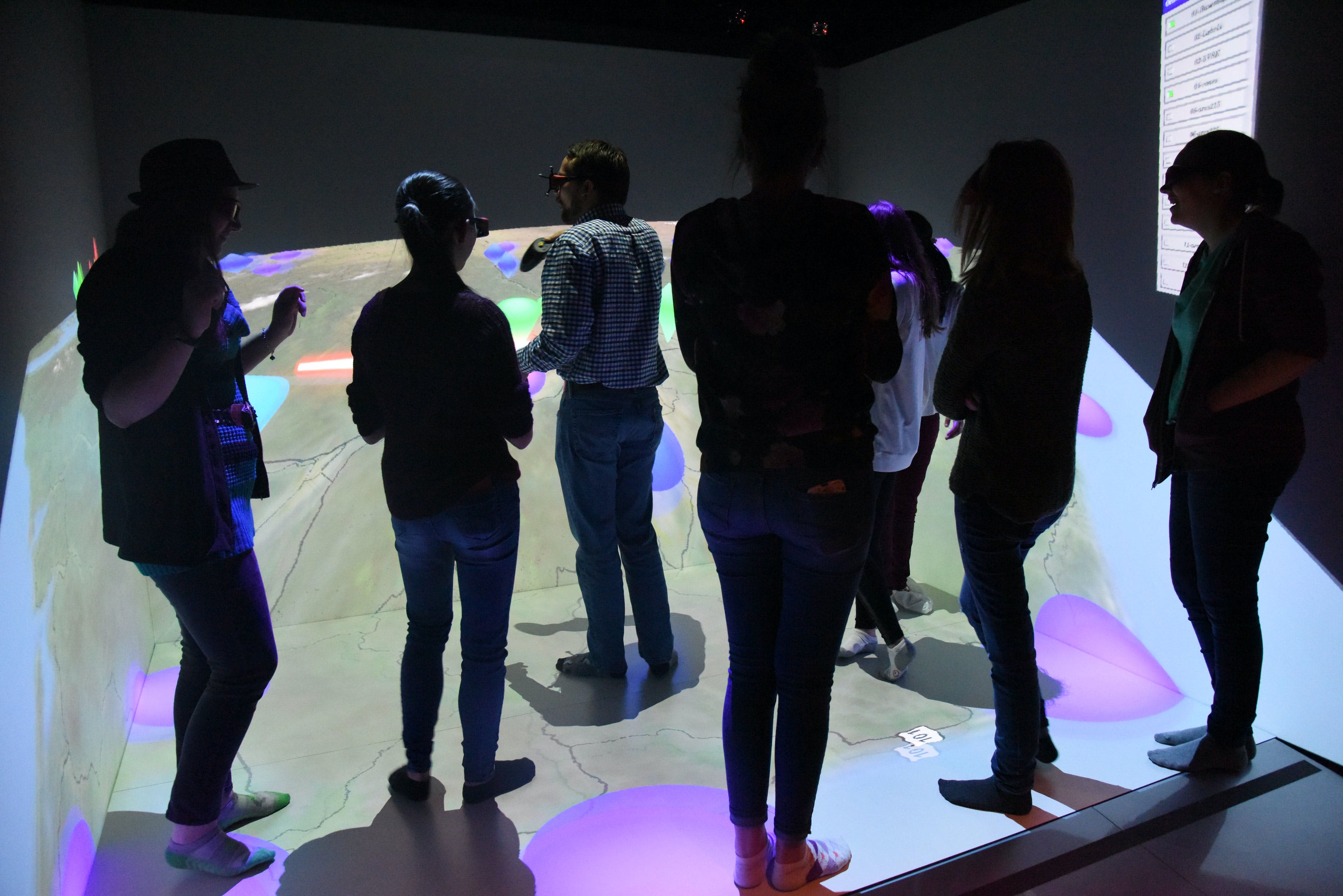 Statistician Ross Kunz explains the 3-D visualization of data sets to students from Compass Academy in the Computer-Assisted Virtual Environment (CAVE) at the Center for Advanced Energy Studies.

“I wanted to provide an opportunity for high school students to learn about the grid,” said McJunkin. “Since National Engineering Week was upcoming, I thought it would be good to bring in area high schools to play the GridGame.” From there, INL’s Anne Seifert and Kortny Rolston-Duce made arrangements to broaden the focus to STEM, with hands-on activities from the Energy Environment Science & Technology directorate.

In addition to INL staff, McJunkin got help organizing the event from the local Institute of Electrical and Electronics Engineers (IEEE) section. Next time he hopes to work with IEEE’s Region 6 to get broader participation from schools in Idaho and the Northwest.

“This is really great,” said Joseph Timchak, a biology teacher at Compass Academy in Idaho Falls. “It gives them perspectives they probably don’t get in school, and that’s really good for them.” When he learned about the event, Timchak sent an email to the whole school, and ended up bringing 20 students to the event.

Ella Gonzalez, 17, a student at Skyline High School who studies computer science at Compass, said she was most surprised by the Applied Visualization Laboratory at CAES. She had visited the AVL’s Computer-Assisted Virtual Environment (CAVE) during a field trip in eighth grade, but that was before she developed a deeper interest in computer programming. 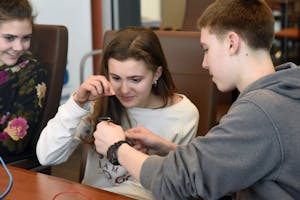 Students from Compass Academy use a caliper to measure the width of a human hair, in a workshop on engineering, standards and energy at the “Engineering Your Future” event held Feb. 22 at CAES.

Now considering Boise State University, Gonzalez said she was even more excited about the possibilities after hearing INL statistician Ross Kunz talk about how data sets can be loaded to create 3-D visualizations, offering an alternative to spreadsheets, and how new technology is going to make research more immersive and interactive.

In addition to IEEE, exhibitors at the event included Idaho State University, Boise State University and University of Idaho – all members of the CAES consortium – as well as ISU’s Energy Systems Technology & Education Center (ESTEC), and Idaho Falls Power.

The highlight of the event was a staging of the “GridGame” in the CAES Auditorium. Adding load, finding customers, and fighting off cyber-attackers (who are fond of instant messaging “BWAHAHA!”) are all part of the scenario. Game points are earned by providing power and then used to buy more grid assets and grow the grid. Whoever ends up with the most money wins, but it’s not that easy. 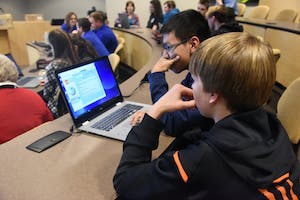 Keenan Bryan, left, and Andrew Jue, of Idaho Falls High School, monitor their GridGame totals on a laptop. The INL-developed simulation lets teams compete against each other as they try to balance load and customers while fending off attacks by hackers.

Things can go south in a hurry if a player adds too many customers, especially industrial customers, as Keenan Bryan, a sophomore from Idaho Falls High School, and IFHS Senior Andrew Jue learned. The two, both members of the IFHS Scholastic team, knew nothing about power generation before sitting down at a laptop in the CAES auditorium to compete against six other teams. Neither did most of the other teams, and the “Rabid Squirrels,” composed of Idaho Falls Power engineers and their boss, Jackie Flowers, won in a walk (the team was named in honor of the most common cause of outages, rodents who climb power poles and unwitting fry themselves on high-voltage transformers.)

The winning student team was composed of Ashley Rivera, Dallin Peck and Alexander Clinger, all Compass Academy students. The team was invited to and recognized at the Eastern Idaho Engineers Week Banquet, Feb. 23 at the Idaho Falls Shilo Inn.

“I think it went great,” McJunkin said. “I think we got just the right mix of folks. I was glad to see Idaho Falls Power get into it. They came in with a background, but I know they played the game ahead of time to familiarize themselves with it and give the students a high mark to shoot for.”

“We love events like this, because it gives us such a great opportunity to engage with kids and show them what we do,” Flowers said, adding that it’s also a good way to spread the word about the Idaho Consumer-Owned Utilities Association’s annual Youth Rally, a six-day camp held every July at the College of Idaho in Caldwell.

NOTE: The Grid Game can be found online at http://gridgame.ironforidaho.net/